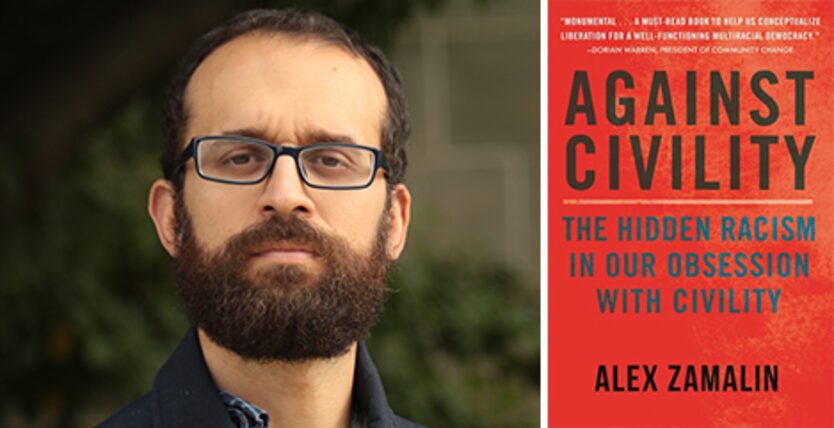 Instead of Calls for ‘Civility,’ We Need Civic Radicalism: Alum Alex Zamalin on His Latest Book

Be Stone / November 1, 2021 / Comments Off on Instead of Calls for ‘Civility,’ We Need Civic Radicalism: Alum Alex Zamalin on His Latest Book / Alums

Alex Zamalin (Ph.D. ’14, Political Science) has published a book almost every year since defending his dissertation. The latest, Against Civility: The Hidden Racism in Our Obsession with Civility, shows how calls for civility from both the right and the left have been used to hold back Black social activists and justify violence against Black Americans since the nineteenth century.

Zamalin, who is a professor of political science and director of African American Studies Program at University of Detroit Mercy, recently discussed his new book with the Graduate Center:

The Graduate Center: Calls for more civility have come from across the political spectrum. Do you see any contexts in which civility would be helpful?

Zamalin: Part of what I try to demonstrate in the book is that civility has such a fraught and racialized history that, despite our best efforts to use civility for racial justice, the effort is always going to be inadequate, fail outright, or monopolized by the very forces that want to promote inequality or are comfortable with a certain level of inequality.

Which is to say I think that, yes, of course, there’s a difference between those on the right who say we need more civility and we need to ensure that more right-wing voices are brought into the conversation, and those on the center-left who say we need to all get together and try to reach a kind of consensus in a civil way. However, I think whenever you introduce the language of us versus them, civil versus uncivil in the political arena — which is an arena of power and inequality — you often tend to empower the very forces that want to discipline, punish, chastise, and castigate the very populations that historically have never been allowed to determine the rules of who is civil and who is not.

GC: How has the concept of civility been used to maintain inequality in American history?

Zamalin: One of the things that I tried to do throughout the book is distinguish between the various uses of civility, and there’s one use which is more often than not taken up by right-wing reactionary forces to demonize opposition and folks who are engaged in political activity. I’m thinking about the 1898 Wilmington race massacre, when a mob of 4,000 came into the city of Wilmington, which had a Black-led government, and essentially destroyed the town. I’m also thinking of all the various instances of racialized violence against Black citizens today who are not doing anything apart from literally living their lives, but they’re deemed uncivil because of their race.

The other use of civility, the more pernicious and the more insidious, is trying to use it as a way to silence righteous protest and dissent. For instance, at the height of the civil rights movement in the 1960s, many liberals and moderates were urging Martin Luther King to go slow, to have patience, to not break curfew in Birmingham, to not protest against white supremacy in Georgia and Mississippi. And King essentially said that patience is the tool of power and this is an unacceptable way of calling out activists for being interested in racial justice and trying to struggle disruptively for racial justice

GC: In your book, you said that instead of civility, you’d like to see civic radicalism. How do you define that, and how is it different than civil disobedience?

Zamalin: One of the things that I want to emphasize as an intellectual historian is that it’s not enough to simply criticize or offer an alternative genealogy of civility. It’s important to look at history to understand what the alternatives are. And if you look at the history of Black political struggle, in particular, you see that the most successful antiracist movements are those that do not traffic in the language of civility. Instead, they are disruptive, they make concrete demands upon institutions, they try to create the rules of engagement through calls for justice and equality rather than playing the game of who is civil and who is not. In so doing, all of these Black social movements, whether the anti-slavery movement led by Sojourner Truth, Frederick Douglass, the anti-lynching movement led by Ida B. Wells, the civil rights movement and all its offshoots, or today the prison abolitionist movement and Black Lives Matter — all of these movements are united, despite their various differences, in their attempts to seize the public sphere and to argue, unapologetically directly and sometimes disruptively when necessary, for justice and freedom.

They are not playing by the rules of civility, because all of these movements recognize that that’s a losing strategy. That it’s a strategy that will only be used against them by the opposition. Because once you use the terms of moral and immoral, civil and uncivil, those who are racialized as uncivil Black Americans bear the brunt of brutality and violence and inequality. For me, civic radicalism is how the Black tradition has tried to mobilize and engage in direct action to achieve racial justice.

GC: Did the Graduate Center influence your interest in these questions?

Zamalin: Being a student at the GC cultivated in me a sense that the questions I needed to ask as a researcher, as a scholar, are those that are publicly centered and concerned with some of the most important issues of our time. I mean, I literally sat in the library and saw the flows of people outside on Fifth Avenue. It was hard to feel disengaged while at the GC, surrounded by students who care, by folks who wanted to do research that was active, engaged, making a public impact. It was hard not to be moved to take up questions that have a more public focus and to consider the concrete ways that ideas have meaning in the world.

Published by the Office of Communications and Marketing.

Need help with the Commons? Visit our
help page Send us a message
Skip to toolbar

Built with WordPress Protected by Akismet Powered by CUNY